On March 9, Sherrie Andre was found guilty of trespassing and disturbing the peace and was sentenced to THIRTY DAYS in jail, the maximum possible penalty.

We are shocked and enraged. But we know that this is the exact type of violence that the Bristol County Sheriff’s Department, the prison industrial complex and the criminal “justice” system impose on people every single day.

Sherrie was arrested at a protest in August 2018 at the Bristol County House of Corrections. The action was carried out in solidarity with people detained by ICE at the facility who launched a hunger strike to demand better conditions. During the action Sherrie was brutalized by the Bristol County Sheriff’s Department.

At the trial, the prosecution failed to prove that Sherrie committed any crimes, yet they were still found guilty. Despite dozens of letters of support submitted on Sherrie’s behalf, the judge enforced the maximum sentence.

After the jail sentenced was announced, one of Sherrie’s supporters was violently arrested in the courthouse.

Despite the repression we have faced, we will keep fighting to support our people and hold the Bristol County Sheriff’s Department accountable for their violence.

Letters can be to sent to Sherrie while they serve a 30 day prison sentence at the Bristol County House of Corrections:

All mail MUST include a return address. More info about sending mail to the facility can be found here: https://bcso-ma.us/visitors-mailinginfo.htm 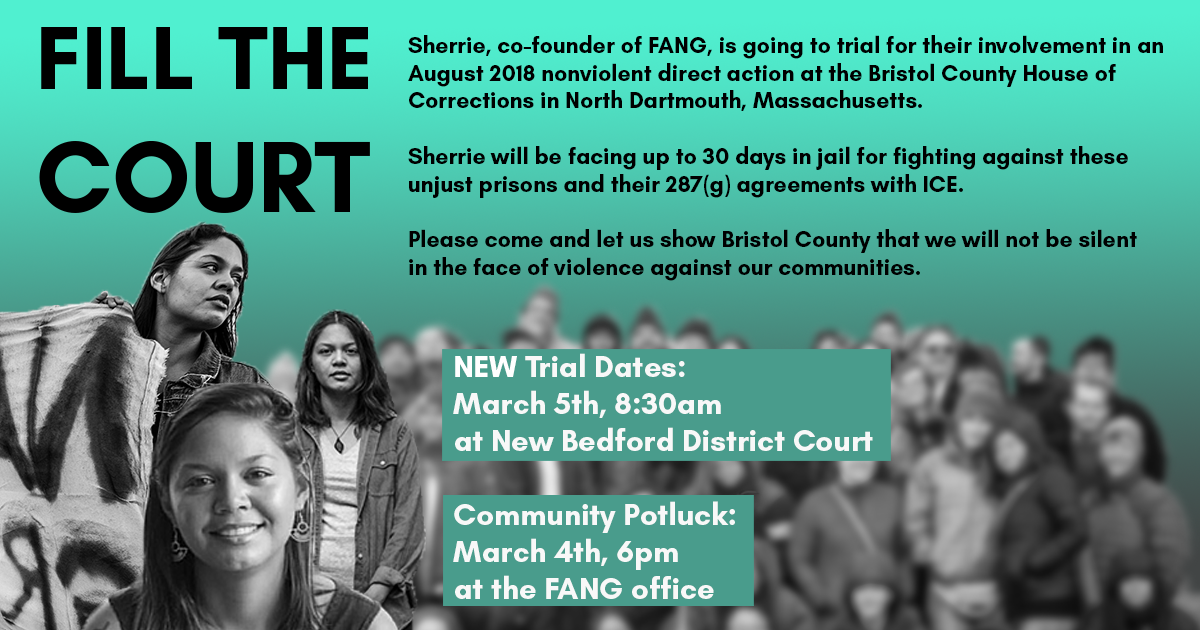 Next week three of our friends, who were arrested in resistance of ICE, will be going to court. Please come out to support them.

Last August four people with The FANG Collective were arrested at the Bristol County House Corrections after peacefully blocking the entrances to the prison. The action was carried out in solidarity with ICE detainees who were on hunger strike to protest the dire conditions at the facility. Bristol County officials, including Sheriff Hodgson, reacted to the action with violence, resulting in two demonstrators receiving traumatic brain injuries.
More information about that action can be found here.

Amory, one of the four people arrested at the action has been sentenced to ten days in jail. Last month Holly, one of the other people who were arrested as part of the action, served a jail sentence in Bristol County. Another person began their sentence last week. Sherrie, who is the fourth person being prosecuted for taking action, could begin their trial this month.

On July 17, Sherrie is making a motion to move the location of their trial. This could be their final court appearance before the trial begins.

We are asking people to come to the New Bedford District Court at 8:45 on both days to show our support for Amory and Sherrie!

On July 19, Lee is seeking to have her charges dismissed after being violently arrested during a meeting between ICE and the Bristol County Sheriff’s Department. She was violently arrested after peacefully speaking up. More information on that action can be found here.

Sheriff Hodgson, the head of the Bristol County Sheriff’s Department is a close ally of Trump and is known for his violent and racist policies. Hodgson is facing several lawsuits and investigations focused on corruption and the awful conditions at the facilities he oversees.

If you need a ride to the courthouse on either day, post on the Facebook event pages (links for the 16th and 17th here). We also are requesting donations for this, as we plan to bring petty cash to help other community members who need to pay off small fines in court.

Thank you for your support!!